It’s been a busy week at Banting House NHSC, and preparations for World Diabetes Day 2019 and Dr. Banting’s birthday are in full swing! Even though the event isn’t until November 14th, there is still so much to be done to prepare. One of my main projects this week was organizing a critical path for the event. Basically, a critical path is the sequence of steps and activities that must be completed to allow for a project or event to be completed, and occur on time. For the World Diabetes Day (WDD) event, I have our critical path laid out week by week, starting mid-September, so each week we are able to assess what tasks need to be completed, and check them off when they are done.

One of the steps that is included in the critical path for this week is to identify the “Dear Dr. Banting” letters to be read out at the ceremony. We often receive letters in many different languages, so both English letters and letters in other languages are typically read out at the event. This year, however, we also get to read a historic letter, as we recently received a number of thank-you letters written to Dr. Banting during the 1920s, which remarkably resemble the modern-day “Dear Dr. Banting” letters that are written at Banting House. I was lucky enough to get to go through and read these historic letters, and it was truly a moving experience.

This “Dear Dr. Banting” letter (pictured below) in particular caught my eye. It is written by a five-year-old girl from Massachusetts who was diagnosed with diabetes in 1921. She writes that her parents were afraid that she wouldn’t get well, until they brought her to the hospital in Boston, and she was given insulin for the first time. She concludes her letter by writing “My mama says this is the happiest Christmas she has had for years and we thank you for making it so. Your little friend, Dorothy Zielinski” 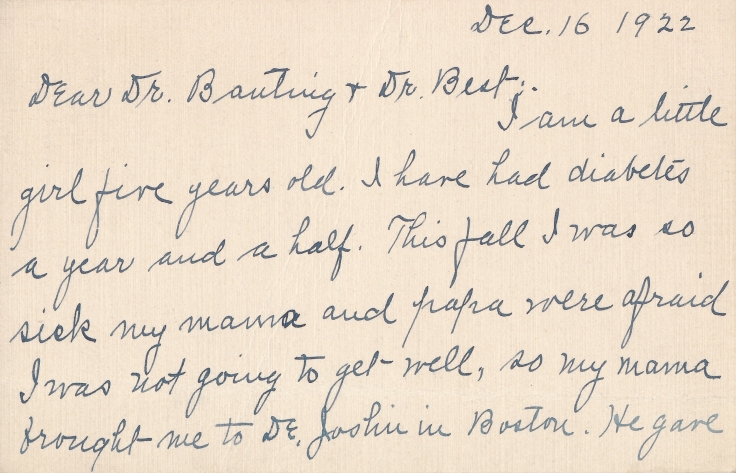 This letter in particular bears a striking resemblance to the modern-day “Dear Dr. Banting” letters that are written by children at Banting House every day. It’s the same size, same shape, and shares the same level of gratitude, despite being written almost 97 years ago. It made me wonder if people still write to inventors and scientists like that today, in order to thank them for the enormous impact that they had on their lives, or is that a practise that was lost in history? Was it typical to write to those who made life-changing discoveries back then, or were these individuals just so incredibly thankful that they felt they needed to express it in some way? These are questions for another blog post, but reading the letters was definitely one of my favourite experiences at Banting House so far.

If you want to hear more letters like this one, make sure to come out to the WDD celebrations on November 14th from 6:30 pm – 8:30 pm at Banting House NHSC! It’s going to be an unforgettable, fun-filled event, and we hope to see you there to celebrate with us! Check out our event on Facebook here if you would like more information and to let us know you’re coming!

This post was written by Jenna Philbrick, Graduate research Assistant at Banting House NHSC. Jenna is currently completing her M.A. in Public History at Western University.