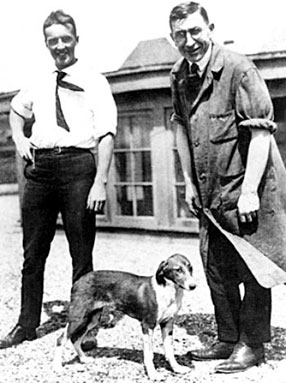 Charles Herbert Best was just 22 years-old when he began working with Dr. Frederick Banting on experiments to isolate insulin in the summer of 1921. He had just graduated with bachelor’s degrees in physiology and biochemistry and was starting grad school. He reportedly flipped a coin with Dr. J.J.R. Macleod’s other grad student, Clark Noble, to see who would work with Banting. Best was only meant to work for one month with Banting, but he decided to continue working once they saw positive results. He continued to work with Banting throughout the experiments and is credited as one of the co-discoverers of insulin.

After the discovery of insulin, Charles Best was put in charge of the Canadian production of insulin at Connaught Laboratories. He also acted as a ” a liaison between the Research Laboratories of the Eli Lilly Company in Indianapolis and the Connaught Laboratories in Toronto”. In fall 1922, he entered Medical School at the University of Toronto while maintaining his responsibilities at Connaught Labs. The Banting and Best Medical Research Act was passed in the spring of 1923 to provide funds to support medical research at the University of Toronto. Banting acted as the first director of the Banting and Best Chair of Medical Research, while Best was hired as a Research Associate.

In 1925, Best graduated top of his class from medical school at the University of Toronto. On the advice of H.H. Dale, Head of the National Institute for Medical Research in London, Best decided that he needed more post-graduate training to pursue a career in medical research. He and his wife moved to London, England for two years where he completed his PhD under Dale. Best and Banting corresponded through letters during this time. The two men wrote on numerous occasions about wanting to conduct another research project together. Best returned to Toronto in 1927 and took over Dr. Macleod’s position as the Head of the Physiology Department at the University of Toronto after Macleod moved to Scotland.

Best led numerous teams in medical research as his time as the Head of the Physiology Department. His most famous breakthrough during this time was the purification of heparin for human use. Heparin is a blood thinner that is used in surgeries, and is especially crucial to open heart surgeries and organ transplants.

During the Second World War, Best conducted medical research relating to warfare. After Banting’s death in 1941, Best became the director of the Banting and Best Chair of Medical Research which provided him more resources for his research. He acted as director of the medical research unit of the Royal Canadian Navy looking at topics such as motion sickness, night vision, and nutrition.

After the war, Best resumed work in the field of diabetes research. He worked with a team to attempt to stimulate insulin production within individuals with Type 1 diabetes. He also became honorary president of the American Diabetes Association, Canadian Diabetes Association (now Diabetes Canada), and the International Diabetes Federation. In this role he supported international diabetes education programs and campaigns.

In 1965, he retired from his jobs at the University of Toronto. In 1971-1972, Best traveled around the world to take part in ceremonies and celebrations of the 50th anniversary of the discovery of insulin. Over his lifetime, he received numerous honours and recognition for his part in the co-discovery of insulin. Best passed away in 1978, becoming the longest living co-discoverer of insulin.