Earlier this year, our curator Grant and I hosted a group of fourth year Western University Medical Science students to take part in an object and information hunt through the museum as a school outing. Why bring medical students to a museum you might ask? Well, it just so happens that some of their course material deals with diabetes. We thought – what better way to teach about the history of diabetes then to bring these students right to the home where the idea, which led to the discovery of insulin, all began!

The reason I am bringing up an activity which happened last semester is because we are gearing up for round two, which makes this the perfect time to reflect on the lessons learned from round one. After all, there’s always room for improvement.

When originally creating this activity, we planned to give the students (who would be broken up into groups of 5-6) each a piece of paper with an image of an object or information panel. Their job was to, in their group, find this object, answer the question given and try to write down as much information as they could while keeping in mind things like ‘what is the importance of the object?’ and “what does it have to do with Banting and diabetes?’. At the end, each group would elect one person to give a short 5 minute presentation on what they were able to learn from their object.

Before running the activity in full swing, we had two students from the program come by the week before to do a test trial. Good thing we did, as Grant and I quickly learned that those with a history background have a very different way of thinking and finding information than those with a science background. We decided, after seeing that our activity wasn’t quite clear enough, that the clues we gave needed to be less abstract/history based, and that our questions needed to be more straightforward, and in some cases,  not require much background understanding of certain events or trends in history.

The activity went off well and I took some general notes after it was finished on things we could improve upon. Coming to our second round, we reformulated a lot of the questions given for each object and gave more detailed clues where necessary. Here’s hoping that the second round of our scavenger hunt is even better than the first!

As a final thought, this was a great learning experience for me. It really didn’t occur to me that there would be such a major difference in the way I go about answering questions and looking at information, versus a non arts student. The test run before the initial scavenger hunt was essential to the activity going off smoothly, and my notes taken afterwards were extremely helpful in finding more places to improve upon for the second event. This time, I know we will be able to better guide students towards getting the most important and relevant information from their short visit to the museum.

The photos below are from the first scavenger hunt, and a look at the activity sheet we handed out. 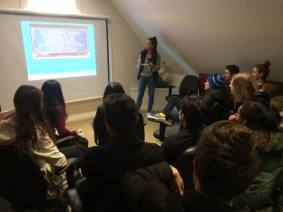